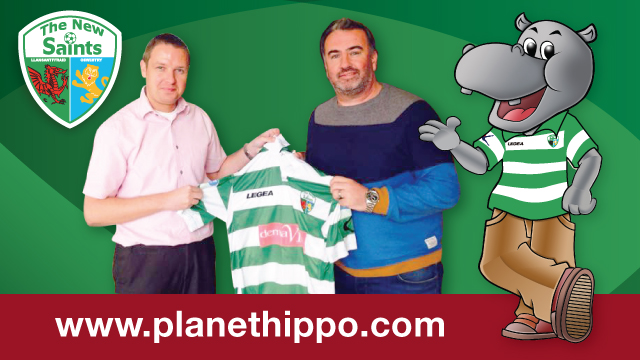 A major sponsorship deal has been agreed between Planet Hippo Internet, the award-winning provider of cost-effective internet services, and Welsh Premier League champions The New Saints FC. The deal is worth an estimated £300,000 over a three season period.

As a rapidly growing supplier of domain registration, website and email hosting services, Planet Hippo is hoping that this sponsorship will play a significant role in raising the profile of the company and enable it to compete more effectively with market leaders such as GoDaddy.

“We wanted to partner with a Championship winning football club as part of our ongoing marketing strategy and felt that The New Saints would help to grow our business at a fraction of a price of an English football league club,” commented Darren Lavendar, Managing Director of Planet Hippo.  “Together, we can benefit from the continued success that the team achieves, both on the pitch and in the community, and expect this deal to be the start of a successful long-term business partnership.”

Key to this new sponsorship deal has been the success of the club’s other commercial partners.  For example, during the eight years that Total Network Solutions was involved with the club, the company achieved a massive increase in brand recognition as the latest results were read out live on TV every Saturday afternoon.  Total Network Solutions’ growth rate was around 60/70% a year and the Oswestry-based business was awarded the title of the UK’s Fastest Growing Company on three different occasions.

Derma V10 has also sponsored the team for the past two seasons, during which time the club has won two Welsh League titles and one Welsh cup as well as representing Wales in two Champions League campaigns.

According to Bruce Lansom of Derma V10: “Sponsoring TNS FC throughout one of their most successful periods with our logo displayed  prominently on team shirts, stadium and on national television, has delivered increased awareness of our brand and products across Wales, the UK and Europe.”

“We are delighted to announce this new sponsorship deal which will enable us to reach an even wider fanbase,” added Ian Williams, Chief Operating Officer at The New Saints.  “The New Saints are currently experiencing massive growth on a number of social media platforms including Facebook and Twitter.  The increasing number of likes and followers, coupled with a growth in matchday attendances, presents significant commercial opportunities for organisations looking to increase their online market presence.”

The club has a very strong web presence because of the success achieved by The New Saints on the pitch with many thousands of articles appearing on leading news sites such as the BBC through to random bloggers. As a result, the club’s Google rankings are very high with stories often appearing on the first 50 pages presenting further commercial opportunities for sponsors.